FREE SHIPPING WITH PURCHASE OF GIFT BOX OR MINIMUM $30 ORDER.

I work from home with Coen here most days.

When I work, it’s in increments of 10 and 22 minutes.
If Coen is on his own crawling around, I will have to check to see what is happening about every 10 minutes.
If he is watching a TV program, like Sid The Science Kid or Daniel Tiger, I have about 22 minutes to come back and check on him again.
Some days are more difficult than others to keep that pace up. To really concentrate on any detailed work, or any difficult projects is almost impossible, so I save them for after he is sleeping (I have never stayed up this late in my life!). 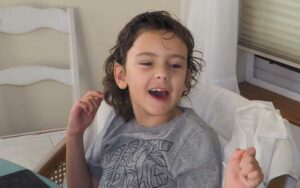 One day, I was finishing up some baking in the kitchen and Coen was in his cubby/play area in the living room.  He likes sitting on his brown chair. It’s a floor chair that supports his back, so he doesn’t have to “W sit.”  “W sitting” is exactly what it sounds like. Sitting on his bottom with his legs bent in the shape of a W.  It is not good for his knees or anything else.

When he is in the cubby area, he usually looks through his books and finds something to tap with.
My ears are always on high alert to make sure he does not find something too hard to tap with and end up hurting himself.

His Auntie Kiss bought him a bunch of fidget toys that I have stored in one little box. That box is his go to.  He finds something in there that will keep him interested in a few minutes by twirling it or tapping it.  He has never really played like a typical child.  He will sometimes do a simple puzzle, but he does not play with cars, or blocks, or any other form of standard toy play. Instead, he does more task-like things, like emptying out blocks and sorting them by color. We have tried many things to engage his interest in toys but so far, but we haven’t really found anything.

He is more of a sorter of colors and pieces instead of a builder of blocks. And that is simply fine.

One night, just before my mental timer of 10 minutes was up, I heard him say, “Gigi!”

I peeked around the corner and said, “What?”

With a giant grin on his face, he shouted, “Watch out!”

He obviously was thinking about a story he heard.  I ran to him and said,
“We should run from that bear!”

He agreed and I helped him stand up and we took off down the hall.

and so I grabbed him a bit tighter and picked up the pace.

We ran in to his room. “Your bed will be base, and we will be safe from the bear”.  He held on to the side of the bed and pretended to breathe hard like we were actually running really fast! That was funny!

We kept this game up for a while running from the bedroom to another room, then to the bathroom for a safe spot and then to the kitchen counter.  All the while I wanted to cry with joy, but we laughed instead!  He would think of a new place to run so away we went, running as fast as we could. We played for a while; neither of us wanting it to end.

Then, suddenly he said “all done.” And he was done.

It was his bedtime shortly after, so I got him ready for bed.  We brushed his teeth and washed his face and hands and all the while not a word was spoken. He had the biggest sweetest, silly, crooked smile on his face. I hope he was thinking about how much fun he had running from that bear. I was overjoyed with excitement and could not wait to share this new news with the family. These sweet little things that are huge milestones and remarkable activities make up so much of what we all hang onto for him.

He climbed into his big, cozy bed and I stroked his beautiful head of wavy black curls and told him how much I loved him and how much fun I had playing his game.  I asked if we could play tomorrow. And he said, “yeah.”
When I prayed over him, as I do every night, I thanked the Lord for the miracle that he is and for this incredibly special day that I was able to spend with him.

It is sometimes easy to get caught up in negative thoughts when weeks go by and it is just a recording of the day before. But today, hope and excitement and energy is restored once again by being chased by an imaginary bear.