You could see the worry, the sadness, and concern in even the most seasoned doctors. Maybe it was because Lindsay worked as a nurse at this very hospital and her mother was currently a NICU nurse there and had been for 30+ years. These doctors knew her well and they were sad and scared for the seemingly inevitable bad news that they were sure they would have to deliver.

We found out that Coen had a blood pool in his little brain. He had a rare form of a brain aneurysm called Vein of Galen Malformation (AVM). He was the only child in Spokane ever to have this. Because this took so much of his blood, his organs were starved of blood and were in failure.  On top of that, he would likely be blind.

Ryan and Lindsay saw him briefly and took a few pictures.

Coen was taken to the NICU. We knew he would have to have brain surgery for the AVM and the blood pool in his brain the next day. But it wouldn’t be in Spokane. They had to find a neurosurgeon willing to do it.

They were very concerned about his enlarged heart and his overall health. He wouldn’t live long in the state in which he was born. The medical professionals moved quickly, calculating and calm with skill, fear, and determination. At the same time, they spoke to the kids about end of life care. It was very confusing.

Specialists were called. The facts were that he likely would not live through any surgery because he was so sick. We had two neonatal brain surgeons decline when asked if they would repair the ventricles in his perfectly shaped little head. They didn’t feel the outcome would be positive, so they declined.

The staff finally found a doctor in Portland at OSHU. Dr. Barnum. He was our Godsend. He said “yes!” He would take on this very difficult surgery even knowing there was little chance. He did not have a big ego. It was worth the risk to him and obviously to all of us! We saw Coen. He’s here, and he looks perfectly perfect on the outside. That head of beautiful black hair, his silky, hairy olive skin, his long skinny legs and slim arms, long fingers and those tiny nails. He’s absolutely beautiful. He looked just like Ryan did when he was born. It was so hard to believe that he may not live by looking at him.

Ryan’s excitement about his new son was so hopeful. We’ll never forget him saying over and over, “He’s perfect.” “He’s perfect.” It was enough for all of us to be happy for a moment. We were in love with him and ready to do anything to keep him!

Ryan and Lindsay’s good friends, Nate and Megan, had a healthy baby boy the same day Coen was born. The hospital was very careful and kept Lindsay from seeing their baby. At the time, it was odd and didn’t make sense. We later understood they were protecting her from the likelihood of the loss of her own baby.

The staff had to prepare Coen for a life-flight helicopter ride to Portland, OR, from Spokane, WA. A team of specialists arrived, a respiratory therapist, a pediatric nurse, and a few others. I was unsure of their titles, but they all worked slowly and meticulously to arrange Coen in the isolate with all the life-saving devices he needed to make the trip. That entire crew looked very young to me, but very capable. They were focused and moved around him in what was like a very well-choreographed dance. They were all working on tiniest helpless little patient. I wondered to myself, how can those people live with such stressful jobs?  A few of them looked at us from time to time. We were in the hall watching the dance. They could see the fear in our eyes when they glanced over and I’m sure that had to be intimidating.  We were thankful for all of them.

It took several hours to get him ready for the tense 46-minute flight to Portland’s OSHU. I remember one of the doctors being very frustrated with the length of time it was taking to get him ready to g,o but he didn’t interfere with the process. I’m glad. They were under enough pressure. Ryan had gone home to pack a bag. He would be flying with his sweet baby boy. The cesarean delivery meant Lindsay couldn’t go. (She stayed at the hospital in Spokane for several days, and her father drove her to Portland when the doctors finally released her.)

It was time to leave for Portland. They started to wheel Coen away to the roof top. He was full of tubes and gear and you could hardly tell there was a baby under all of that. We were in the waiting room and heard the double doors open. There they were – a staff of at least five, Coen in the portable isolate, and Ryan with his bag.

I hugged Ryan and sobbed and sobbed. I couldn’t keep it together. I am crying now thinking about it all over again. This could be it. It could be over just like that. How would Ryan cope if Coen didn’t make it on the flight? So many scary things went through my head. I said to the last guy out the door, “Please take good care of him.”

He said, we’ll take good care of both of them. I sobbed out loud. Thankfully, Vince put his arm around Ryan and walked with them as far as they would let him go. He didn’t say anything to Ryan. He just gave him all of his love through his strong hold around Ryan’s very slim shoulder. I watched them walk away and toward the outside doors. I stood in the hall and sobbed and sobbed, my head in my hands shaking my head. 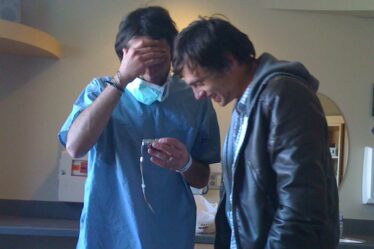