The day Coen was born

It was a Sunday evening. Vince and I were cozy and settling into a comfortable, quiet evening. Sitting in the living room, we were just relaxing, warmed by the the crackling fire. Our first grandchild, a grandson, Coen, was going to be arriving the next day!

Our daughter-in-law, Lindsay, was overdue by a week. Ryan, our son, called to tell us they were going into the hospital that afternoon because Lindsay had an unexplained rash. Ryan insisted she go in. She is a nurse, so she was reluctant as she didn’t think it was serious enough. Ryan called that afternoon to let us know that they would be inducing labor the next morning. They were excited to finally meet this guy, and so were we!

Just as we were getting ready for bed, we got another call from Ryan. He was weeping. I said, “What is it?”

He spit out, “Something’s wrong.”

I heard him, but made him say it again because I couldn’t believe it.

He said, “Mom, there’s something wrong with the baby.”

Immediately I said, “no!” I pounded my foot on the floor and began to cry out loud. This is highly unusual for me. I remember stomping my foot in disbelief while saying, “No! No! No!”

Ryan explained that the doctors did an ultrasound and discovered something was terribly wrong. Coen had a huge blood pool on his brain. His heart was enlarged and there was a huge risk that he would not live through delivery.

I sobbed and sobbed on the phone with Ryan while struggling to put my shoes on so I could get to the kids. Vince took the phone from me and listened to Ryan’s voice repeat what he told me. Vince was calm and said we would be right there.

Ryan said we should just come in the morning as planned. We did as he requested, but didn’t sleep. I sobbed all night and Vince comforted me, and we prayed. Faith has always been a big part of our lives, but this would test us completely.

We were at the hospital the first thing in the morning. I put on a brave face and tried to be strong for them both, but I melted into tears when I looked into their sad eyes. The doctors were not at all hopeful. By 8:00 a.m., there was a room full of people. Lindsay’s parents, her childhood friends, my youngest son, Rick, Vince, many doctors and nurses, and me.

Lindsay’s OB doctor was a Christian man and asked if we could all pray. I was relieved by that request. Everyone in the room, our family, Lindsay’s family, and close friends all gathered in a circle around Lindsay’s hospital bed and the doctor led a heartfelt prayer for Coen, Lindsay, and the family.

It is a moment etched in my mind. I can imagine the picture, and wish there was one.  All these people circled around Lindsay’s bed offering her and Coen all of our love, hope, faith, and strength. We all cried together, holding hands. It was hard to let go of each other.

They wheeled Lindsay away quickly and we all wiped our eyes and waited quietly. Some of us in prayer. Some of us pacing and nervously chatting.

That morning there were specialists and all kinds of staff around and in the room planning, preparing, speaking very softly. About what? We didn’t really know.

Lindsay hadn’t had an ultrasound after the five-month mark, as everything was fine then. It was her first pregnancy so she didn’t know if things were abnormal or not. She experienced some things, but just thought they were a normal part of the pregnancy.

They discovered that there was no amniotic fluid and Coen would have other complications, as well as many other health issues, because of that. We would find out more after the cesarean delivery, if he made it. It was a big “if.”  They weren’t sure little Coen would even be able take his first breath.

The tension was incredible when they wheeled Lindsay off. I wanted to hug Ryan and comfort him, but I was not strong. I just cried and melted every time I looked at him. Oh, the pain I felt for him. His pain was my pain. Vince was very strong and was able to hug him and hold him without breaking down. He needed that. They both needed that. I wish I could have given him that.

Later on, I shared with Ryan where my uncharacteristic behavior came from. Just a month before, I knew of a child born to a heroine-using father and meth-using mother. The baby was born perfectly beautiful and healthy. The grandmother of the woman who gave birth was sure her daughter had used, so they did a blood test and the drugs were in the child’s blood. The grandmother was able to take the beautiful, healthy non-addicted child until her daughter got help. She did get help and never used again.

Because I knew the story of these two drug-using parents who had a beautiful and healthy child, I was angry. “How can this be?” I asked myself this over and over again. Ryan has never drunk a drop of alcohol or done any drugs. Lindsay was also very responsible and healthy.

Ryan made a decision very young in life that he wouldn’t drink or ever do drugs. It wasn’t a religious decision, just a logical one. He’d seen alcoholism on both sides of his family and knew he didn’t even want to try it. By now he’d also seen kids at school make fools of themselves while completely drunk. He quickly gained a reputation for being the guy to call if you need a ride and can’t call your folks. He still has that reputation. They are both responsible, careful people.

It’s one of those unfair situations that made me question everything. There was no reason for them to have all these difficulties. They did, and have done everything right.

This was the first and last time I questioned God about Coen.

We waited a long time in Lindsay’s hospital room to hear something, anything. “Please Lord, please let him be okay,” I said to myself over and over and over again.

I still have a hard time remembering his actual birthday because of the dramatic entrance. This wasn’t your typical wait-and-then-celebrate type of birth. They told us that it would be so hard on his already taxed body. He would likely not make it. It became a very stressful, nail biting, emotion-filled, terrifying day.

“Will he make it? Please Lord, let him make it.”

Ryan came back to the room where we were all nervously waiting for the news. He was smiling. That’s good!

He came in the room wearing scrubs, looking like he was playing a doctor in a soap opera. One hand on his head and one hand showing us pictures on his phone. He said, “He’s perfect. He’s just perfect.”

Oh, and he was. He was just a perfect precious little baby, on the outside.

Lindsay told us later that the doctors allowed him to take one little breath and he moaned. They incubated him immediately. But he made it! They weren’t sure if he would be strong enough, but he was and it was just the beginning.  There would be a long road ahead.

All we could think about was that he had arrived. He made it! Thank God! The doctors didn’t think he would make it through the birth, but he did. We thought it was going to be okay. We were so relieved, but had no idea what was going to happen next. 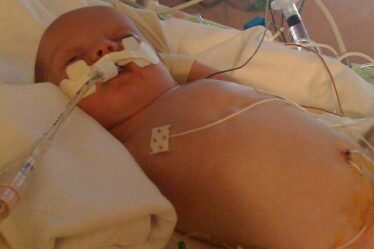